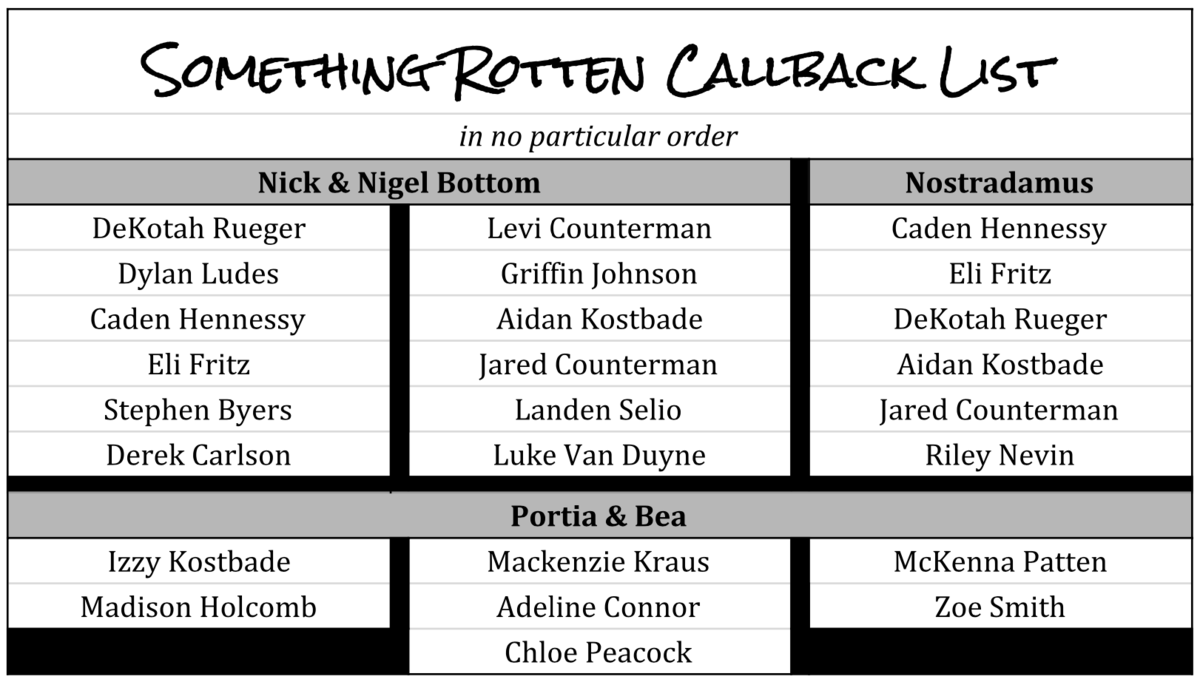 London, 1595. "Welcome to the Renaissance," when William Shakespeare is at the top of a list of famous playwrights, while Nick and Nigel Bottom are definitely, well, bottom. The brothers are rehearsing their latest hope for a hit play, when their patron turns up with the news that the Bard has written the very same idea. "God, I Hate Shakespeare!" declares Nice to his shocked troupe.

Back at home, Nick's wife, Bea, suggests that she could help out by getting a job. "Let me be your 'Right Hand Man,'" she implores, but the suggestion only makes Nick feel more like a failure. In private, he repeats "God, I Hate Shakespeare!" — even if he admits to himself that it wouldn't be so bad to have some of that success... if only he could know what the future holds. With that idea, he takes their precious savings and heads off to Soothsayer Alley.

Here, Nick encounters Nostradamus (or rather, his nephew, "Thomas"). Nick pays him to predict the next big thing in theatre, and Nostradamus foresees "A Musical!" Nick is convinced that this is what they must write! Their musical will be about something epic, a massive historical event, and so his troupe dances its way through a catchy little number about "The Black Death." Their patron is appalled and quits. Brother Jeremiah, the Puritan who hates all theatre, warns them not to add evil music to their already sinful plays.

But Jeremiah's beautiful daughter, Portia, loves poetry and plays so when she discovers that she shares this passion with Nigel, they list their favorites in "I Love the Way" while falling in love with each other. They are amazed to be invited to hear a private recitation by William Shakespeare, who performs "Will Power," but at the show's after-party, it becomes clear that Shakespeare only wants to steal young Nigel's notebook. Nick bursts in, just in time to prevent the theft, but is publicly humiliated by the Bard.

"Welcome to the Renaissance," where Shakespeare is complaining that it's "Hard to Be the Bard." His spy informs him that Nick Bottom has hired a soothsayer to steal Shakespeare's greatest idea, so the Bard adopts a disguise and infiltrates Nick and Nigel's troupe. They have been rehearsing their first number, "It's Eggs!" but Nigel can't help but feel as though something isn't right about all of this. He shares his feelings with Portia, who urges him to write from the heart. Portia imagines her fellow Puritans declaring "We See the Light" once they have heard the beauty of Nigel's poem, but in fact, when Brother Jeremiah catches the two of them together, he banishes his daughter to Scotland. Feeling bereft and almost suicidal, Nigel writes all night and creates a masterpiece. When the disguised Shakespeare hears lines like "To be or not to be" and "Get thee to a nunnery," he knows that he has got to get this play. Nick is maddened that it has nothing to do with eggs, but Nigel insists that the only thing that matters is "To Thine Own Self" be true. He refuses to write Omelette and walks out. Bea reminds Nigel that for all of his faults, Nick would always be his "Right Hand Man." Nigel agrees to go back and write Omelette the Musical; Bea is confident that it is a show that they will never forget.

There's "Something Rotten!" warns the cast at the top of Nick's make-or-break show. Nick gives it everything that he's got as he sings the title number, "Make an Omelette," complete with dancing eggs and cameos from every musical that Nostradamus has foreseen. One actor goes off script, though — the newest recruit to the troupe pulls off his disguise and reveals himself as none other than William Shakespeare! He tells everyone how Nick stole his idea, Nick is publicly disgraced and worse, Nigel is left feeling utterly betrayed.

In court, Nick and his collaborators face execution until Bea shows up disguised as their elderly male lawyer. Nick realizes that he should have listened when Nigel told him "To Thine Own Self" be true, and the brothers are re-reconciled. Bea calls Shakespeare as a witness, who persuades the star-struck judge not to execute them. Instead, they are banished to the New World and told to take their so called "musicals" with them. Portia defies her father and runs away with them. In America, they perform their new show with a "Finale" written from the heart, like Nigel always wanted, the very first of hundreds of American musicals!

The Bard. Over the top with a huge ego.

Nick’s sweet younger brother. A struggling writer who falls in love with Portia, a Puritan.

Nick’s wife. She loves Nick despite his past lack of success. She dresses up like a man to prove she can be an actor.

A Puritan woman who loves poetry, theater, and ultimately Nigel.

Portia's father. A Puritan who thinks Nick and Nigel's plays are sinful.

A posh patron of the theater.

An investor to whom Nick and Nigel are in debt.

WE WILL NOT HAVE A LIVE PIANIST DUE TO RESTRICTIONS.

So you will need to provide your own instrumental/backing track at your audition. We will have a sound system for you to connect to your phone, or chromebook.